After my first few months in Asia, I swung by SF when I was back in the States, and since they have a couple stores there (“Dogpatch Base” being the main location?) I swung by to try some things on (quality is high, but so is the price).  Here’s how they’ve worked out: 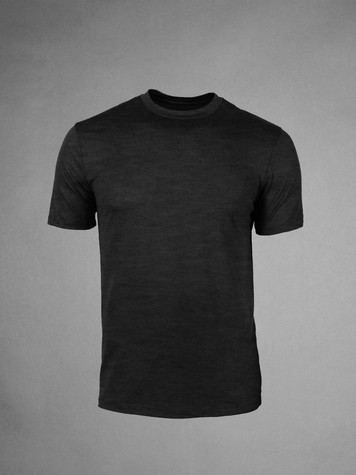 Early on in my trip I lost one of my SmartWool Microweight T-Shirts (these won my travel t-shirt shootout from the month I spent in Africa and I’ve been wearing them almost exclusively since then) on my trip. Since I only carry 4 shirts with me, I was looking for a replacement and I ended up picking up a Patagonia Merino 1 Silkweight t-shirt at their Shibuya store. To summarize: don’t do that – it started pilling after about a month – this is from hand-washing and air-drying from someone that’s used to dealing with delicate Merino, mind you.

So, to make a long story short, I was still looking for a replacement shirt, and since I noticed TAD had a Merino shirt, the Traverse Tech T, I figured I’d give it a try. This weight is the same weight as the SmartWool Microweight (150g/m2) but it feels quite different – the TAD shirt has a looser/softer weave, whereas the SmartWool one is much more sheer/dense. I actually quite prefer the feel of the TAD gear for normal wear, although I suspect the SmartWool would do better as a base layer.

The main weakness w/ the SmartWool Microweight is that it tends to rip/wear through pretty quickly. I tend to have to either look ridiculous with tiny holes (especially near the waistline where it interacts w/ backpacks/belts) or replace them every couple months. So far, the TAD shirt has fared better. There’s one hole in the back, but it hasn’t grown or multiplied and in general feels sturdier. I’ve had it in rotation for about half-a-year at this point and there’s no pilling and nothing’s coming undone, and it’s as comfy as ever. It weighs the same (+/- 10g) as my SmartWool shirts and seems to dry as quickly as the SmartWool (that is, ridiculously quick), so I think this is will be my new go-to shirt that I’ll be cycling in as my other shirts wear through.

Both the TAD and SmartWool shirts are about $70/each, which are completely worth it if you travel – the Merino wool dries quicker than even synthetics, breathe amazingly in the heat, keep you warm in the cold, and also don’t stink up like synthetics. 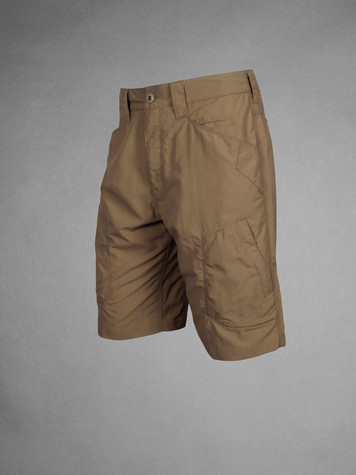 I’d been previously wearing a pair of random cargo shorts that weren’t anything special, but just wouldn’t die. Since they’re probably the thing that I wear the most, I figure it’d be worth an upgrade. TAD has two types of cargo shorts, but the Recon ACs are the decidedly less “tactical” and slicker/more urban design.

They’re very lightweight (a medium thickness nylon) but sturdy and are quick drying and super well designed on the pocket front – each front side has a smaller “coin” pocket, and also an additional split in the larger pocket that’s pretty handy. Rather than flaps, the lower pockets are side zippered.

Now unfortunately, the Recon AC has two pretty huge weaknesses.  First, while the site description says that the crotch is gusseted, the version I have (that I bought at their Dogpatch store) definitely is not, at least not in a way that lets me get on a bike without turning it sideways. Considering how I was biking practically every day in Berlin, this was a bit of a bummer.

The second issue is almost laughable. For whatever reason, the zipper top is not as secure as you’d like it to be, and while it hasn’t caused too much embarrassment yet, more than once I’ve noticed that my fly’s been down.

So overall, I’d give the Recon a pass, and I’ll be on the lookout for some better shorts in the future. 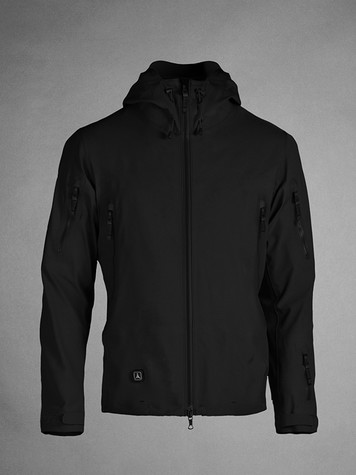 So, to preface, the Stealth Hoodie LT is not cheap – it’s $475, by far the most expensive piece of clothing in my bag (in fact it’s almost the cost of the rest of my entire wardrobe), so to some degree, whether this is even something you’d consider depends on how much you value your outerwear.

Over the past few years, I’ve run into my fair share of wet weather. 50mph sideway torrents in Everett WA, tropical storms w/ 20ft swells in the Caribbean, floods that washed away my camp in South Africa, typhoons in East Asia – you name it. Every time I’ve upgraded my rain gear (it’s also made me a little obsessed with waterproof gear in general).

My last upgrade was to a Patagonia Torrentshell, Patagonia’s most waterproof rain shell I could find. Sadly, it seemed to have given up the ghost after a year or so. I wasn’t sure if it was just not dealing well w/ the rain+humidity combo in Taiwan, but by the time I was in the much colder rain in Tokyo, I’d concluded it had just given up.  While I’ve been a big Patagonia fan in the past, I have to admit that I haven’t had very good luck with them recently.  In any case, it was time for an upgrade.

I originally wasn’t completely convinced on spending so much on a jacket, but handling and trying on the Stealth Hoodie LT, you can immediately tell that the money is being spent on the construction – it’s meticulously put together, and feels rather bombproof. TAD has a comparison of how the LT compares to the regular  Stealth – if waterproofing is a concern, the LT is obviously the way to go.  It’s heavier than a light shell/rain jacket, and it’ll be interesting to see how it fairs in steamier environments, but since I was planning for fall/winter, I figured it might be a fair trade-off.

A couple notes: you’ll definitely want to try it out, as the sizing may be a bit tricky – I ended up w/ an M since that was the perfect sleeve length, but it is a bit tighter around my chest than I’d like. This may improve if I ever lose that weight I’ve packed on. Hope springs eternal. The pockets are a bit unconventional – there are two chest pockets, but none at the hips. It also has some big zipper pulls that can flap around noisily/ridiculously while biking. The zippers are all quite tight/seam-taped, and as mentioned, everything about the construction.

After a bit of wearing it around, I decided I wanted one, but they didn’t have the grey/unpatched version in stock, (The green was a bit too “tactical” for me. Also, you might think it looks cool, but don’t get the black unless you plan on never being out in the sun.) so I spent an extra day or so thinking about it before pressing buy from the online shop. The next shipment came in that week and I had it at my doorstep in days.

Six months in, and I have to say, I’m really glad that I picked this up. It’s broken in great, has enough storage (the chest pocket will fit my Kindle Paperwhite) that I often don’t feel the need to wear my ridiculous travel vest everywhere (more on that in the future), and honestly, if I don’t lose it, I don’t feel like I need to replace this thing for years. That being said, while I’ve been through some Berlin and Portland rain, I’ve yet to encounter much serious wetness, so we’ll have to see what happens there.

OK, that’s my 6 month review of my TAD Gear stuff. They seem to be quite popular with the outdoor/tactical crowd, so if you’re really interested and can’t stop by a store, there are lots of videos and reviews and such online. In any case, 2 out of 3 ain’t bad.